This morning I got up, went to the dehydrator, and pulled out a tray of Maple Cinnamon Buckwheat Crispies from Raw Food Real World.  (No, maple isn’t really raw…ooh, controversy!)  Then I sliced some apples, mixed them with a “syrup” out of dates, cinnamon, cardamom, lemon juice and coconut water, and topped them with the Crispies and little bit of chopped walnuts.  Voila! 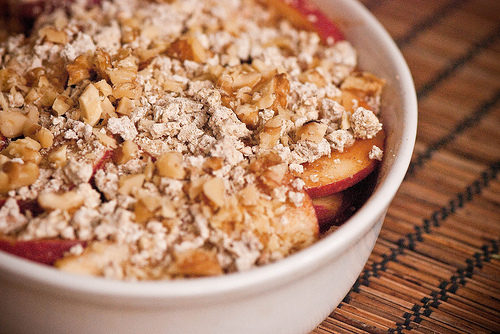 I know it’s crazy, but I had a piece for breakfast, topped with some vanilla cashew cream that I’d made yesterday.  It was SO GOOD. 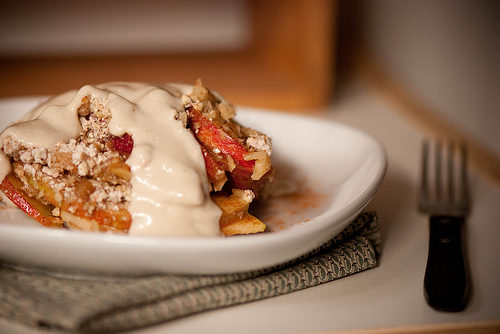 Since I heard we might be getting some snow, and at the very least a frost, this weekend, I’m trying to get the last harvesting out of my puny driveway container garden (we don’t have a yard).  One thing I grew this year was some brussels sprouts, and they were on the more successful end of things, though only one stalk in particular was adequately productive. 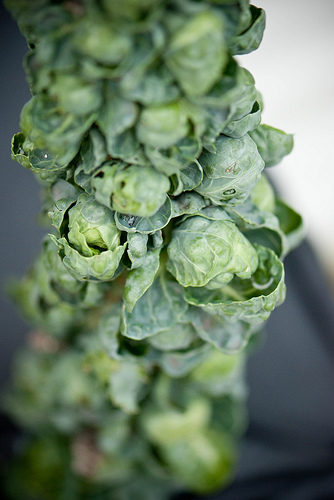 I knew it was the time to make some Mole-Roasted Cauliflower from my zine*, only using brussels sprouts instead!  My friend Jackie just sent me a message saying she loves this recipe, so I’m going to share it here for everyone.  These are zesty, flavorful, and delicious… if you’re spice-wary, reduce or omit the cayenne.  (Yes, there are still zines available!) 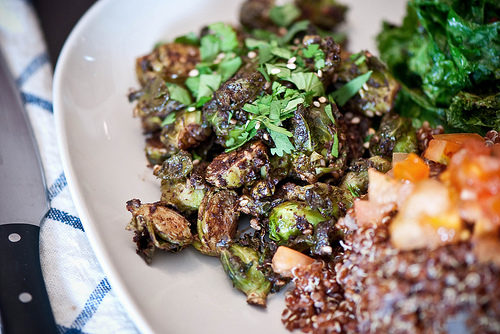 Preheat oven to 425F. In a medium mixing bowl, whisk together all ingredients except cauliflower and cilantro. Add cauliflower and toss well to coat, then place in a single layer in an oven-safe dish. Roast for 25-35 minutes until edges are crispy and browned, and sprinkle with chopped cilantro. Serve hot.

While the brussels sprouts were roasting, I cooked up some red quinoa that I topped with the last tomatoes from the garden: 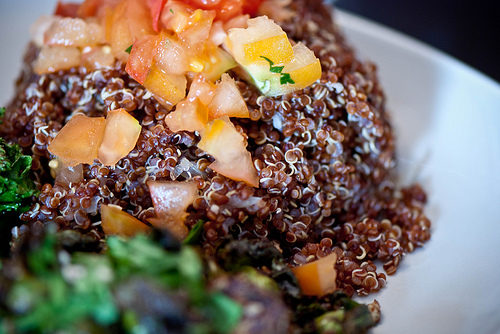 And you know how I said in the quiz from yesterday that I was scared to work with mustard greens?  Well wouldn’t you know, today I got some in the CSA box, and I decided to go for it.  I sauteed some sliced garlic in olive oil, added the chopped mustard greens, and then drizzled the whole shebang in white balsamic, which is sweeter than it’s more common cousin.  The mustard-y flavor was subtle and lovely, and the balsamic balanced out the intensity that I’ve always feared.  Hooray for trying new greens! 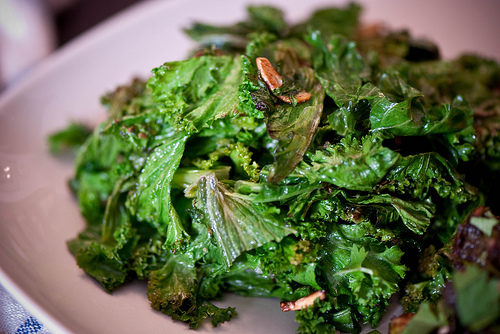 In other news, I’ve been working on the new blog, and it’s tough work!  Getting more creative control is hard for me because I get crazy about all the choices I have.  I haven’t even begun to tackle reformatting image sizes since I have a larger layout.  Woof.  One day, though, it will be done.  Hope everyone is having a wonderful day, and I’ll see you back here tomorrow!