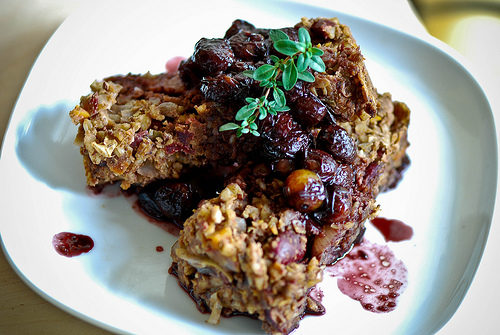 If you know what true haggis is, you know why I’m not going to go into a description of it and then try to justify the need for a vegan version or if you can even call it haggis when it’s vegan.  And if you don’t know what it is, I’m sparing you the horrible details of Scotland’s national dish which has a mass-produced vegetarian (vegan) version on the market that was initially developed on a dare and now, I’ve heard, makes up 25% of the one of the major haggis producers sales.

Why do I know about haggis?  As college student recently done with my freshman year, I was struggling to figure out who I was and why I loved/hated boys (not for the usual reasons, turns out I was gay!) and didn’t have a family to go home to on holidays.  So I made the semi-rash decision to go backpacking on my own in the UK and Ireland and Sweden for 7 weeks (7 weeks!), where I saw all manner of amazing sights, learned a lot about myself (like living out of a backpack for that amount of time is lonely and wearing), and completely, utterly fell in love with Scotland.  I was vegetarian at the time, so I’ve never actually eaten the haggis, though I distinctly remember surviving largely on digestive biscuits with Scottish cheddar for a large portion of my bus and train travel around the country.

I loved Scotland so much I decided I had to study abroad there, and ended up spending a term there one year later at the Glasgow School of Art, back when I was an interior design student.  A friend of mine from Minnesota was studying in London and he came up to visit Scotland.  We traveled to Glencoe and hiked in the forests and hills and stayed in an old youth hostel, where we cooked our dinner in the large communal kitchen, and he had decided to buy canned haggis, which really isn’t very traditional either.  But it seemed pretty harmless in that form.  Last year when I went to visit my sister I got to try McSween’s veggie haggis as well as a mind-blowingly amazing homemade version at a small restaurant on the Isle of Skye.  I knew I someday wanted to make it at home – really, it’s just oats and protein and some veggies with fairly minimal seasoning.  But there aren’t a ton of recipes online, and many of them use tvp or veggie grounds, and I wanted to make a soy-free version (my version can also be made gluten-free, if you have gf oat products at hand).

This is my first attempt, and I think I’d like to change a few things about it for the future, as I think it could make a really great Thanksgiving entree with some sage and things.  It’s very filling, simple and savory, though a bit mild — a rich and/or tangy sauce akin to what I made for it really jazzes it up.  Traditional Scottish seasoning is a bit of a joke amongst people “in the know” as it were… usually you get a laugh and a recommendation for salt and pepper.  I added some cloves and nutmeg, and deglazed the pan with a little bit of whisky to add a little more Scottishness and depth, but that’s optional.  This makes a hearty loaf (rather than a more traditional wrapped or encased dish, as I didn’t want to deal with any potential failures there), so feel free to halve it if you try it out.  Mix up the nuts and root veggies for different variations, or add different seasonings — it’s almost like that mix and match vegan loaf website.  Using a food processor for each of the steps reduces the amount of fine hand chopping a

I’m not including a sauce recipe because I didn’t really measure anything and I wasn’t sure what was going to happen.  But what I did was throw a handful of ground cherries into a small pot with half a bottle of red wine, a few black peppercorns, and a big splash of balsamic vinegar, and cooked it down while the loaf was baking.  It was really yummy, though a tart cranberry sauce or other red wine-based sauce would do equally well.  Without further ado, I give you soy-free, gluten-free (option) vegan haggis… 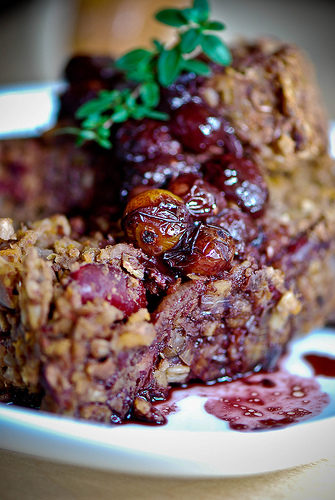 1 15 oz. can kidney beans, rinsed, drained, and mashed or pureed

Heat the olive oil in a large cast iron skillet or other pot large enough to hold the oat, nut, and vegetable mixture.  Add the oats and nuts and toast until fragrant, then add the onions and cook until tender and starting to brown.  Stir in the root vegetables and mushrooms and cook, stirring to prevent sticking, until soft and reduced in volume.  Break up the bullion cube into the mixture, then season with pepper, cloves, nutmeg and salt, adjusting to taste.  Deglaze the pan with whisky (or water) and combine with the kidney and lentils in a large mixing bowl. 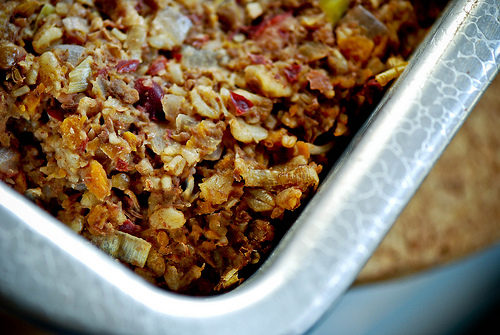 While the mixture is cooking, preheat the oven to 350 and lightly oil a loaf pan.  Fill the pan with the mixture and press in, smoothing the top.  Cover tightly and bake for 45-50 minutes, or until baked through (it may be slightly crumbly when you cut it).  Serve hot with sauce or gravy, and mashed potatoes (or turnips!) and cabbage.